When picking out children’s books, I try to pick books that I think Audrey will be able to relate to and that I think she will be able to learn from. When I read about Peter and the Whimper-Whineys by Sherrill S. Cannon, I really felt like it would be something she could get something out of because all kids go through a whiny stage and at four years old, Audrey is in it. 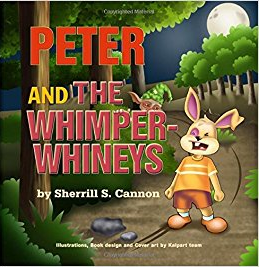 The first thing that Audrey and I both loved about the book is that it rhymes. To me, rhyming books are fun to read and now that Audrey knows what rhyming words are, she gets very excited when she can point them out. The rhyming words in the story immediately had her engaged and listening.

The book not only address whining when we don’t get our way, but whining when things just aren’t fair. It also includes a part about his sister, which I especially liked since Audrey will soon have a new sister to share with. Peter and the Whimper-Whineys teaches a lesson to children about why whining isn’t a good thing.

When Peter first meets the Whimper-Whineys after wandering away from home, he may think he has met someone who understands at first, but he quickly discovers that being surrounded by Whimper-Whineys isn’t that fun. Peter soon begins to understand what his mother was saying about why he should stop whining. When everything is soured by whining, it is no longer enjoyable. Peter learns to appreciate what he has instead of whining about everything.

I love that the book had Audrey engaged from the very beginning. Another thing I loved was that it opened up a conversation for us to talk about why whining is bad and why we should be grateful for what we have.